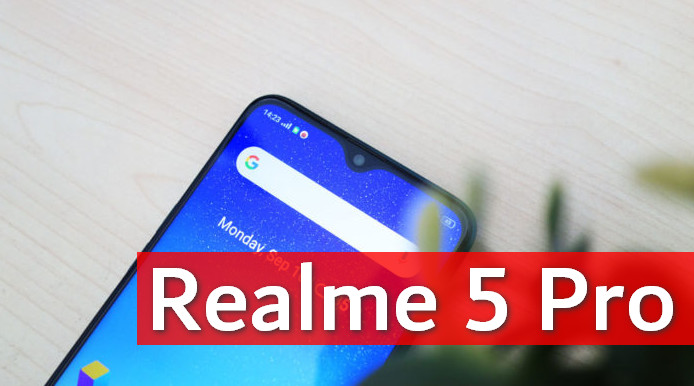 Realme 5 Pro is one of the next Android smartphones by Realme to feature 4 rear cameras.

Four rear camera setup allows users to capture photos with a variety of interesting modes. In addition, the rear main camera has a 48-MP resolution.

With this hardware combination, Realme 5 Pro expects to compete with other mid-range smartphones.

Realme brings a full screen with a notched display in the form of dewdrops on the front. Turning to the backside, this smartphone adopts diamond-like style at its rear body that looks sparkling when exposed to light.

There are 3-dimensional curves on the left and right that allow users to comfortably grasp the Realme 5 Pro with a single hand.

Frankly, the backside of this smartphone seems easy to get dirty from dust and fingerprints. Avoiding such a situation is pretty easy. Simply use the additional casing found in the sales package to be safer from dirt or scratches.

At the bottom, the Realme 5 Pro has a 3.5mm audio jack port, a USB Type-C port, and stylish speaker holes.

While on the left side, there is a SIM card tray consisting of 2 SIM card slots and 1 microSD slot. The volume rockers reside in the left side arranged vertically. Meanwhile, the power button is available on its right side.

The use of IPS screen technology allows users to still enjoy any content on the screen up to a 178-degree angle. Meanwhile, Realme claims that the screen ratio reaches 90.6% with a thin bezel. Hence, playing games or watching videos becomes more flexible.

To minimize the number of scratches on the screen, Realme has embedded scratch-resistant glass powered with Corning Gorilla Glass 3+. On top of that, Realme 5 Pro also boasts Night Shield feature to reduce blue ray radiation to the user’s eyes.

Mobile photography is one of key features that is top-notch in the Realme 5 Pro. Realme brings advanced photography technology to the 5 Pro with 4 rear cameras nicknamed Quad Camera Speedmaster.

By default, the main camera will produce photos with 12MP resolution because it uses Quad-Bayer technology producing photos rich in information. The feature employs a variety of scenarios of Artificial Intelligence. This is what so-called AI Photography nowadays.

Now let’s talk about its ultra-wide rear camera. The sensor of this camera can take photos with large areas up to 119 degrees. It’s an ultra-wide-angle camera after all. This camera is suitable for capturing moments in the landscape, building, urban areas, to group photos with many people.

The ultra macro lens, however, allows you to photograph objects from a very close distance.

Nightscape feature allows users to capture photos that are brighter, sharper and having minimal noise at night. It’s like the Night Sight feature of Gcam.

Realme 5 Pro uses a 16-MP resolution camera as its front shooter with a Sony IMX471 sensor and f.2.0 aperture. This can accommodate selfies or wefies with a smooth face thanks to the AI ​​Beauty feature.

When used for daily activities such as chatting, emailing, social networking, playing games, to editing documents, Real 5 Pro is able to run these multitasking applications smoothly and without any lag at all.

This proves Realme 5 Pro as the best rival for other mid-ranger phones such as Redmi Note 7, Mi 6X, or Redmi K20.